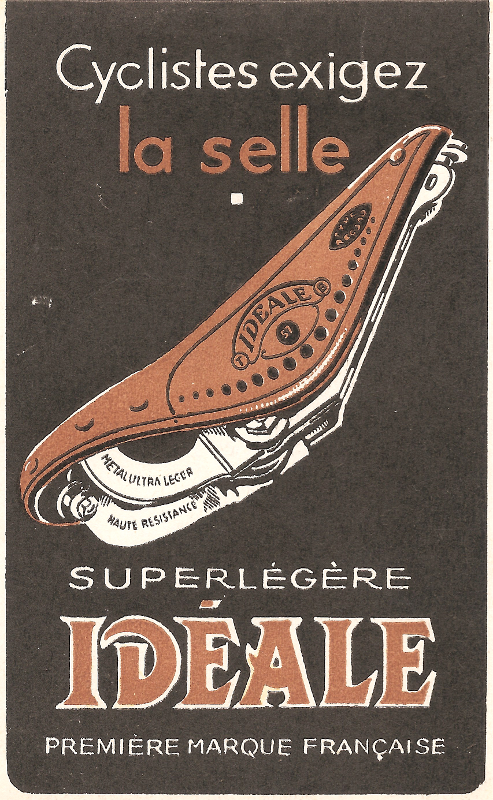 Idéale saddles were a brand of leather saddles made by Tron et Berthet from Pont Saint Pierre, Eure Department, Haute-Normandie, France. Tron et Berthet sourced their leather from two suppliers in France, one in the north of the country and one in the south. The leather for the best saddles had to be a certain thickness, too thin and the saddle top would stretch and sag, too thick and the leather fibres would break as the top was formed causing failure of the saddle. Even when cutting up the hide, knowledge was needed as to which parts of the hide were to be used for the best saddles, the rest of the hide being used for children's saddles. Jean-François Tron had started his Idéale saddle production in the 1890s in Paris and moved to Pont Saint Pierre in 1900. Marcel Berthet married Jeanne Tron. Jean-François Tron died in 1931 and control of the company passed to Jeanne Berthet and her brother Jean Tron. Jean Tron remained with the company until the 1970s when his nephew Pierre Berthet became it's director. Pierre Berthet was the grandson of Jean-François Tron.  Idéale had an association with the Dunlop Company of Fort Dunlop, Birmingham before the outbreak of the Second World War. Tron and Berthet had sourced some of their machinery from England, which would later cause problems, as it was calibrated in imperial dimensions (inches) and of course, France was metric, which required time consuming conversion. 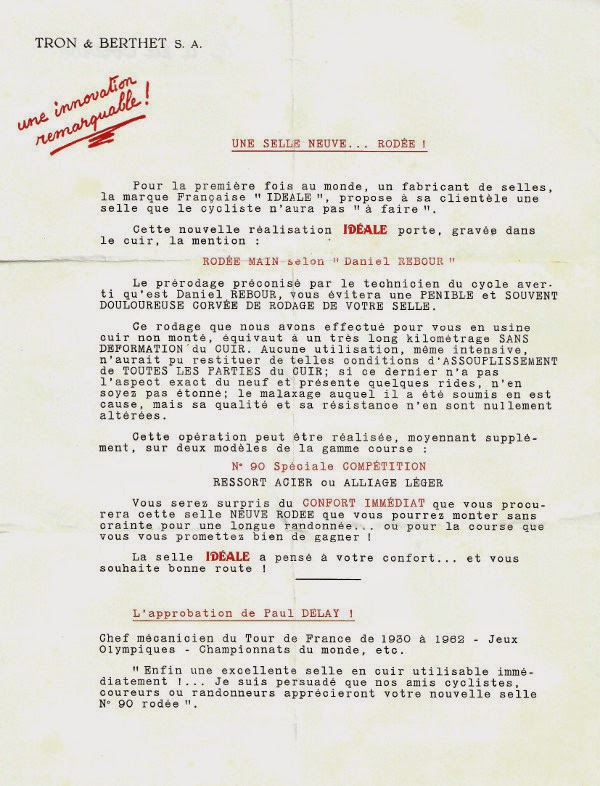 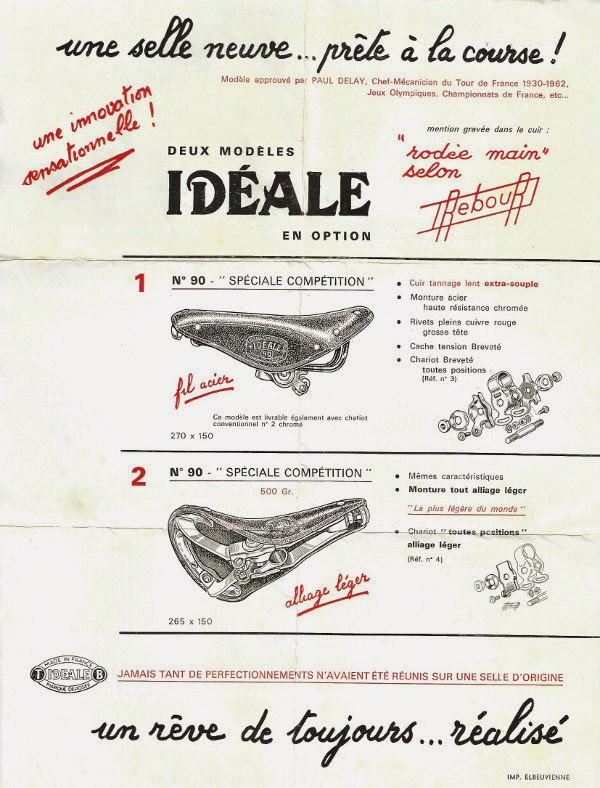 Changing patterns in agriculture after the Second World War were to have an impact on Idéale, as cattle breeds changed to facilitate greater food production. The newer breeds did not produce the type of leather Idéale required and made sourcing the required leather much more difficult and expensive for the company. The changing fashion, within cycling, from the 1960s onwards, for Italian plastic saddles like Unica-Nitor, would also have long term impact. As the fashion amongst cyclists changed from a purely leather saddle, in favour of leather covered padded saddles over a plastic base, (Cinelli, Concor, Milremo, Rolls) meant in reality, many cyclists were not prepared to invest time and discomfort in breaking in a leather saddle to achieve a comfortable seat. So Idéale's market share for bicycle saddles began to decline, as their top of the range saddles were leather, in addition to the other difficulties.  Idéale also had VAR Tools produce a saddle adjustment spanner which would fit both Idéale and Brooks. 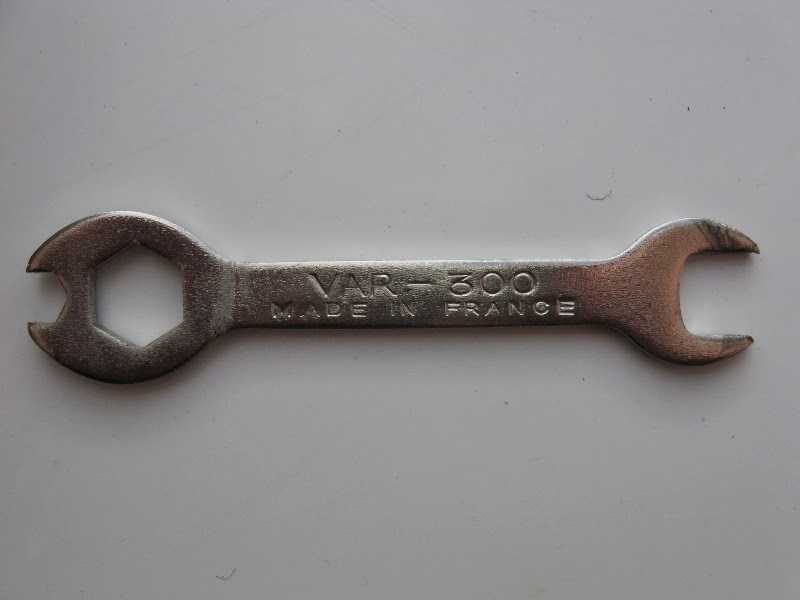 Unlike the English made Brooks saddles, Idéale leather saddles were waterproof, so didn't absorb rain water and sag if they got wet.  Idéale  had developed their own secret process which allowed the leather to be waterproofed in the saddle manufacturing process.  Idéale also experimented with different materials for their saddle frames. Initially they used steel, which on some models was chrome plated. Chrome plating became harder to have done towards the end of production, as changing health and safety regulations forced many platers to close.  Tron et Berthet also experimented with alloy and produced saddles (Model 90R Competition) with an alloy frame. Towards the end of production in the 1970s Idéale made saddles with Titanium frames and seatposts. Special saddles were produced on occasion, an example of which I saw with the leather top drilled full of holes for lightness much like the fashion for drilled components used by time trialists in the 1970s.

Idéale did produce a copy of the Brooks B17 saddle (Model 80 Record)) which sold well. They also developed the Daniel Rebour branded Model 92 'Diagonale' and Model 88 Competition. 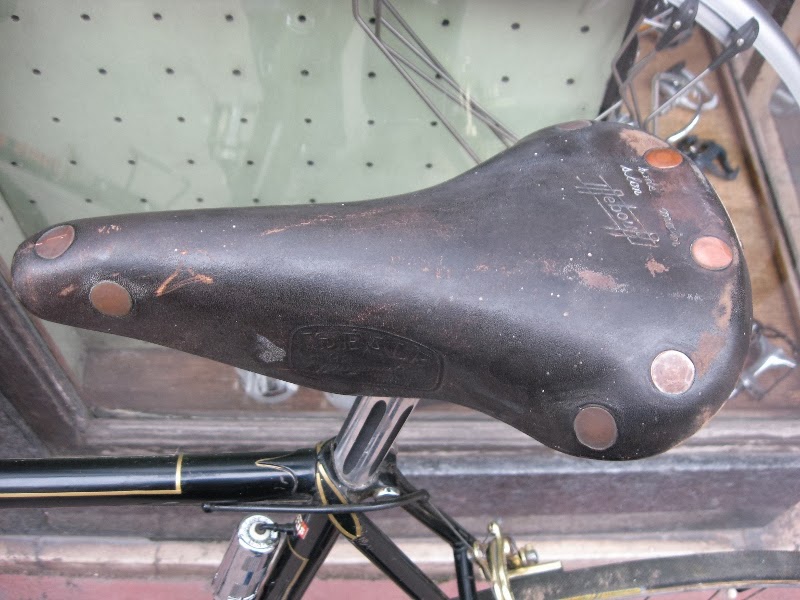 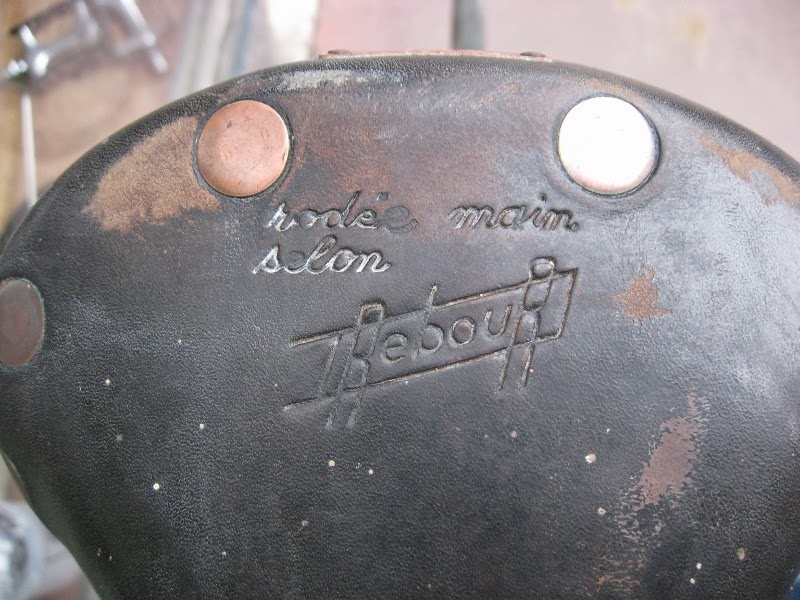 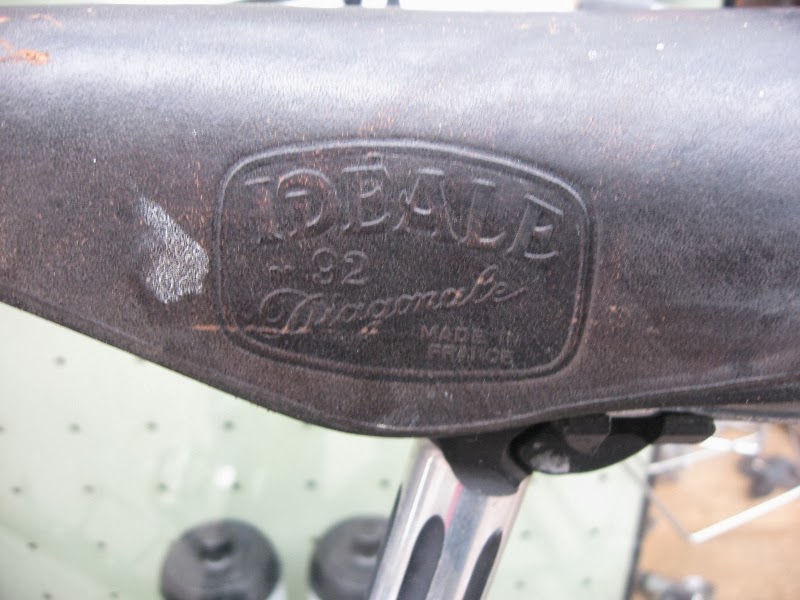 The Berthet family sold the business to another company which wanted to modernise the business and mass produce the leather saddles. In reality, the new owners had little appreciation that the leather had to be hand worked. Their attempts at mechanisation failed and the company went bust approximately six months after the new owners took over. A sad end for an iconic brand. Idéale saddles are well regarded by collectors and were the saddle of choice of many French 'constructeurs'.  Idéale saddles in good condition are now beginning to command high prices on French ebay. 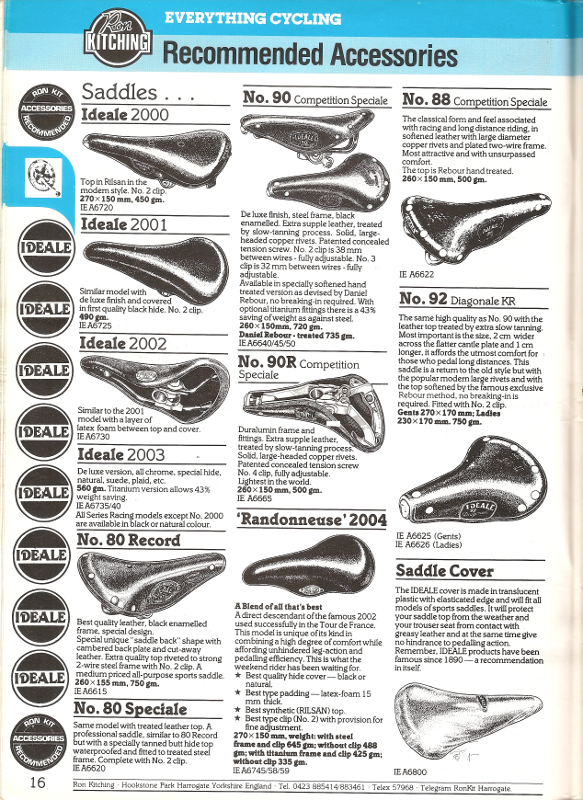 Idéale saddles was one of the lines that Ron Kitching imported and sold from his Harrogate cycle parts business. They were considered expensive by many in the 1970s and I don't have any recollection of any local clubmen from that time using an Idéale saddle in this part of Ireland.
Posted by grubb1937 at 06:49 3 comments:

A car journey through Normandy


On my recent visit to France I had occasion to travel by train from Gare St Lazare to Rouen and meet up with my contact at the railway station there. The journey to his home was fascinating, as we discussed our passion for cycling. Franck had a long association with the French cycle trade and knew Daniel Rebour (a family friend) very well and a lot of the constructeurs personally. He also remarked that he knew the late Jacques Anquetil, who had a penchant for women and drink. 'Maitre Jacques' had retired to the village of La Neuville-Chant-d'Oisel and was often to be seen, in his lifetime there, driving about the roads on his tractor.

We took a detour past Chateaux Anquetil on the Rue des Andelys (D126) and past the memorial to Jacques at the edge of Neuville-Chant-d'Oisel. The memorial stands in black stone on an open green between the Rue des Andelys and the Rue des Jardins. There is a large 'maillot jeune' situated in the grass in front of the memorial. Unfortunately I was not able to photograph it from the car. We continued our journey along the Rue des Andelys to it's junction with the Rue de la Libération, Romilly-sur-Andelle. The T junction is marked by a large racing bike in tribute to 'Maitre Jacques'. Turning left onto the D321 we travelled to Pont Saint Pierre.


After crossing the Andelle river we turned right onto the Rue des Hautes Rives (D19) to see the Tron et Berthet factory where Ideale saddles were made. The former factory was located in an old mill that was originally water powered and only much later being converted to electricity. The former home of Marcel Berthet is located near the mill and the iron fence atop the garden wall was made from stamped out plates produced in the factory.


Franck also was able to show me the De Dion Bouton car which was owned by Jean Francois Tron. Monsieur Tron had a badge made (like a bicycle head badge) with his name on it and fixed it to the grill of the car. 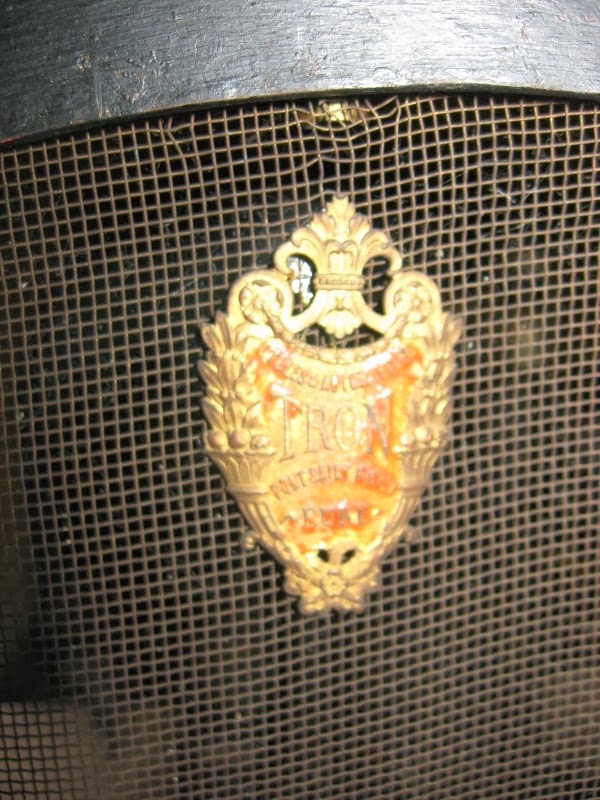 This vehicle is belt driven via a narrow leather belt via a flywheel on the engine to a pulley wheel on the rear axle in the fashion of powering factory machinery from a line shaft. The vehicle had 4 spoked wheels, a basic carburetor and two speed gearbox. 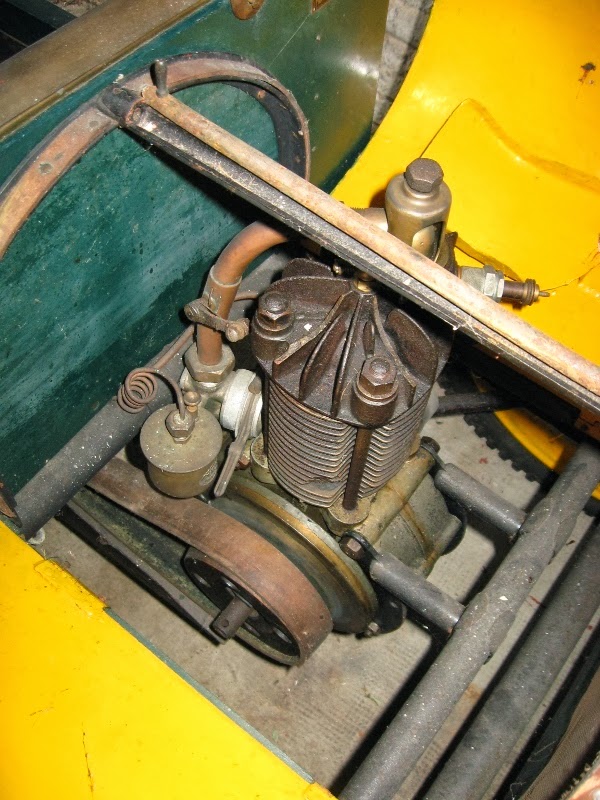 Top speed was around 40km/hr. The car also shared space with a chrome Alex Singer Randonneur, and a Barra loop frame aluminium lady's bike. Franck explained that he had previously owned bicycles by Daudon and Sabliere.

Franck is related to Marcel Berthet and told me that Tron and Berthet started in 1910 and the company had originally produced bicycle forks. Marcel had also been involved in the manufacture of gear boxes for early motor cars. Ideal saddles came later.  Franck then showed me a family photograph album from Marcel Berthet born in 1888. In it were photographs of Marcel riding semi-faired track bicycles used before 1914 to attack the hour track record. Marcel was an amateur rider but had ridden in the 6 day track races before the First World War and had won the Berlin 6 day race in 1910. Marcel had won the hour record three times, initially in 1907 in Paris with a distance of 41.520 Km. His friend and rival Oscar Egg had then broken his record in Paris in 1912 with a distance of 42.122 Km. This started a series of record attempts between 1912 and 1914, whereby Marcel would break Oscar's record, only for Oscar to take it back again. Final honours fell to Oscar with a distance of 44.247 Km before World War I intervened. Marcel had also raced against an Italian rider at the Vigorelli track in which the Italian was expected to win. Against the expectation of the crowd, Marcel won the race and received a stoney faced silence for his audacity. The hostility of the crowd was visible in the photograph.


The UCI had ruled in 1914 against faired bicycles being used in record attempts and competition.  I was shown a programme from a track meet at the Vel D'Hiv track, Paris, in 1927 which Marcel took part in.   In September 1933 at the Parc des Princes, Marcel, aged 47, was to use a fully faired bicycle 'the Velodyne', to break the hour record again. The early HPV was to attain a distance of 48.600 Km. A second attempt, using the same machine, was made on the record by Marcel two months later. The record was broken, increasing the distance travelled in one hour to 49.922 Km.


Marcel's early record attempts before WW1 had been made on a Labor bicycle using a JOG handlebar, which was recorded in a postcard of the time. The Velodyne was a collaboration between Tron et Berthet and the French aircraft manufacturer Caudron. The records captured using the Velodyne were not recognised by the UCI, but it is an interesting early use of a fully faired Human Powered Vehicle (HPV). Marcel also developed a pedal in collaboration with Pierre Lyotard for use in the Velodyne. This was manufactured by Lyotard and was much favoured by touring cyclists. Marcel Berthet died in 1953 at the relatively young age of 65.
Posted by grubb1937 at 03:05 No comments: